Dartmoor: The Tors on Bridestowe and Sourton Common (north)

Before heading off to Wales, we thought we'd get a last (or rather 'first'!) training walk in, but this walk wasn't quite as successful as I was hoping, although we still got all of the new tors done that I had planned.


We parked up at Prewley Moor to take a short stroll over to Shelstone Tor, one of my favourite tors in this part of the moor. It didn't disappoint this time, either.


The next section was always going to be a tough one, as we had to contend with the West Okement Valley, also known as 'Death Valley' or 'Killer Valley' by Ten Tors teams on account of its concave south side, yes, the side we were going to have to ascend to bag Slipper Stones. I was particularly excited as its appearance was a miniature version to what you get in the Brecon Beacons and other higher regions: a glacial moraine. It is believed that northern Dartmoor was subject to glaciation in the last Ice Age; I strongly believe this is the case, as there is ample evidence such as where we were heading to now, Taw Marsh, Wild Tor Clitter, Hollowcombe Bottom, Tavy Cleave, Corn Hole and Great Varracombe - and there are many more.

But first we had to actually get there, first taking a sheep track below some clitter south of Shelstone Tor to cross a small stream, and it was here where the ascent began!!


It was steep but manageable, for now, as there was plenty of granite to explore on the slopes. The views of Black-a-tor Copse are awesome behind you whilst ahead is a massive hill, above which the Slipper Stones can be seen: several huge, granite slabs sitting at a 45-degree angle which were likely smoothed by ice. Water usually runs over them to create a glistening effect when seen from Black Tor and the rest of the valley side opposite.


It was a tough ascent through bracken which hid slippery rocks and I, speaking on behalf of the family, can say that we spent most of it on all fours just to keep a firm grip on this impressive hillside. I should also mention that there are quite a few holes here which you wouldn't expect to find, so I would say avoid the area unless you are a keen adventurer. Death Valley speaks for itself.

We were now on the edge of the Woodcock Hill plateau with Stenga Tor as our next target. It was a blissful walk along the top of the valley until we approached 'The Camel' that is Stenga, losing both feet in bog with no easy approach from this side: a truly horrible spot. There was plenty of cotton grass around to warn us but the tor could almost be touched with my walking poles, so why take the long route? And before any of you say I'm being overdramatic, I know I am, but the bog around Stenga Tor is poorly represented on OS maps, well, it's not marked at all, so it could be a problem for the unwary walker.


We finally reached the characteristic tor, but even that wasn't enough to compensate for our difficult journey here, for the family immediately asked me where the next tor was so they could go to it. I pointed over to Kitty Tor, leaving me to do a quick 360-degree tour of Stenga before catching up with them.

Kitty Tor is a much more welcoming outcrop, despite the two range huts detracting from the beauty of the tor. It may be flat but the ground is easier walking and the views are better, thus we took the opportunity to have lunch here.

At first, I thought the nearby outcrop at the top of Amicombe Hill was a separate tor, but it's not: it's just another part of Kitty Tor, but instead of housing range huts it houses a flagpole.

Hunt Tor, our next target, was visible from here, but we didn't make a beeline as Rattlebrook Head lay in the way, so we went north-west before turning west on a very good path, passing through the middle of the tor.

We all liked Hunt Tor, a fine tor, not trying to be impressive whilst still possessing some interest, not least a huge logan stone which, according to Paul Glanville, was restored in the late 1980s/early 90s by the DNPA.

The stroll to Gren Tor is easy as you are now on a well-trodden path.


We chilled atop the tor hoping the cows on the disused railway track would move, but they didn't. Fortunately for us, they were placid, but me, I wasn't feeling too great, a bit fatigued and dizzy for some inexplicable reason.

At the hairpin bend we continued northward to Sourton Tors, though keeping right to visit both the apple crusher and the stone circle (both on Dartefacts). 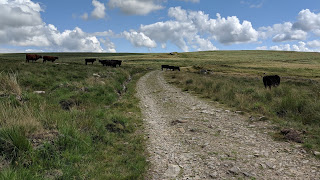 Whilst we were pretty level with Sourton Tors it only made sense we visited them, the upper outcrops anyway, by the trig point at 440m. We watched some paragliders setting off from the tors where they struggled to pick up speed thanks to the lack of wind.


The ice works were visited en route to the car.


I for one was pleased to be leaving the moor for once as I still felt iffy, but it was an interesting walk with some great views.
Posted by Max Piper at Monday, November 11, 2019
Tors/Hills Bagged: Amicombe Hill, Gren Tor, Hunt Tor, Kitty Tor, Shelstone Tor, Slipper Stones, Sourton Tors, Stenga Tor